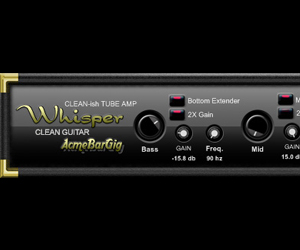 And another Shred suite: a set of six amplifiers, a six cabinet emulator and three microphones that are used to shoot the cabinets.

Add. Information : A set of plug-ins from AcmeBarGig. They mostly focus on https://plugins4free.com/dev/529/ , but
the author's official site is a Facebook group.

To be fair, Preampus Distortus can be used as an amp, just like preamp amps, but the author's description of the plug-ins has exactly this division, which I decided to keep.

For those who decide to use Shred: the plugin has a bug that constantly writes to the history of actions (which can usually be navigated via Ctrl+Z, Ctrl+Alt+Z) updating internal parameters (several times per second). Keep that in mind, because it will make it impossible to move through the story.
video source : Harshit Yadav
AcmeBarGig - Plugins Bundle VST x86
Re-download
Magnet Link File Size 99.1MB
Tags
VST
Related Article