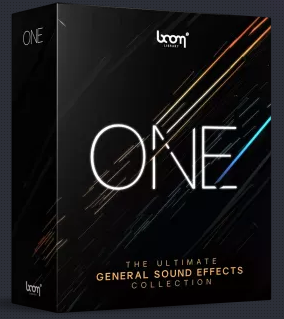 ONE MASSIVE & ENERAL SOUND LIBRARY BOOM ONE is a unique set of original high quality sound effects not released in any other BOOM Library collection.
NEW RECORDS ONLY - NO SOUNDS FROM OTHER BOOM LIBRARIES The
sounds are brand new, created from scratch and not featured anywhere else in any of our collections. They are from all genres for all sound professions, a common library that anyone can use, with common genres that everyone needs that are often left out in other libraries.

ONE SOUND LIBRARY FOR EVERYONE
Starting with 40,000 files containing over 90,000 sound effects, BOOM ONE is our new flagship for general sound effects.
No reused sounds, pristine and stable quality. Ideal for creators, post-professionals, videos, games and more.
ONE GREAT AUDIO RESOURCE
BOOM ONE is the foundation of your success. A complete and consistent reference library of general sound effects that is the perfect complement to our massive BOOM Library themed collection.
Content
UPDATE 23.01
600+ NEW FILES / 2900+ SOUNDS / 5+ GB

Of particular interest are brown bears and their cubs, as a quality bear roar is a real rarity. From ferocious furballs you can expect:
Brown bears
- screams
- breaths
- cries
- growls
- purrs
- sniffs
- moans
- eating

Armor
- chain mail
- full plate
- half plate
- leather armor
- textiles and shield, as well as accessories such as bags, keys and chains

TEAK. Current. BOOM! It's time for the latest update from BOOM ONE to drop anchor and be announced. It has 200 clock files and even more boats and ships.