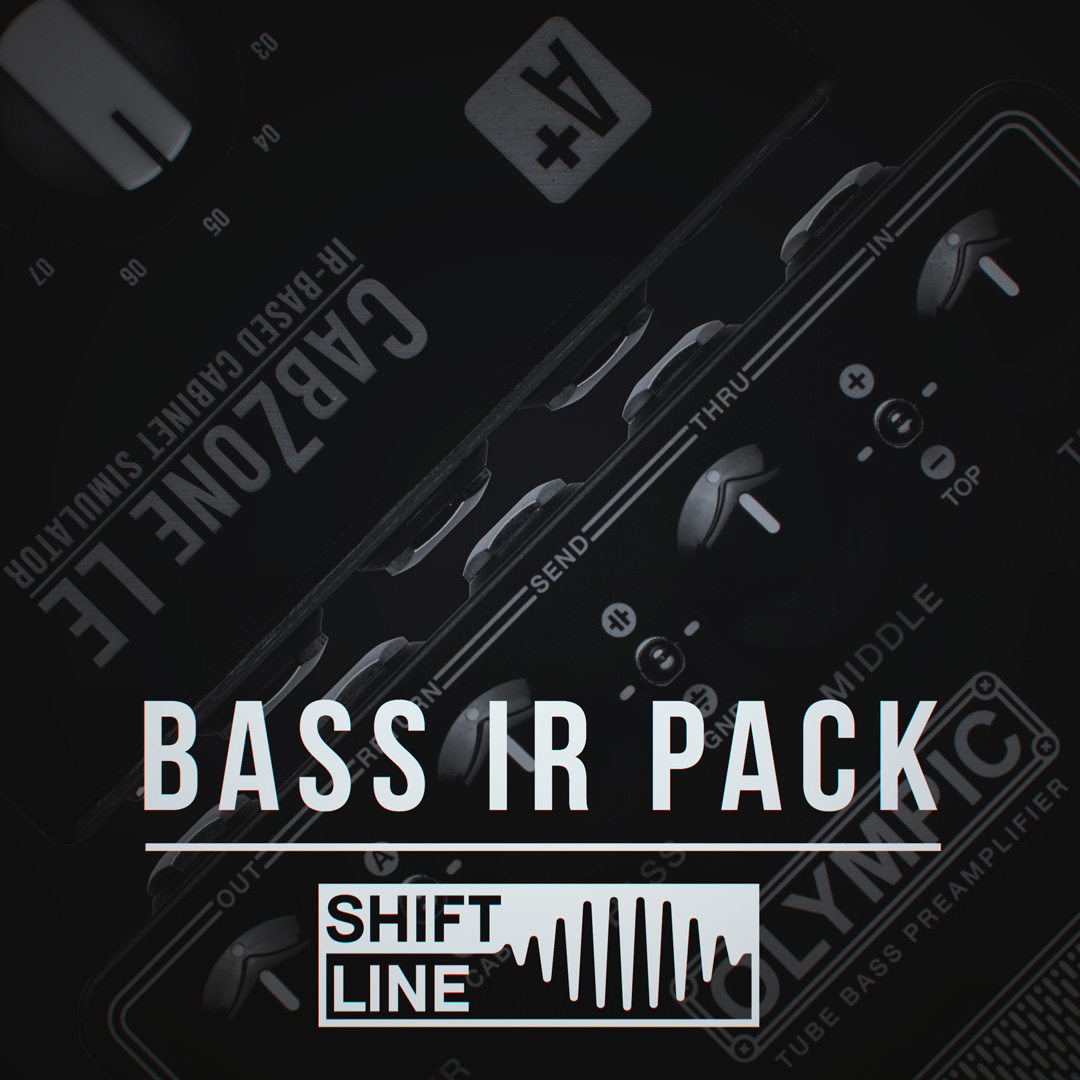 • 01_EBS_PL_410_by_Shift_Line.wav - cabinet, for many, a reference for clean, and it is really close to it. EBS ProLine is an excellent series of cabinets with EBS own drivers. It has a peak at 100Hz and the 2" tweeter creates a great bass clang with resonance at 2250Hz. Fits very well into the mix.

• 02_Hartke_XL410_by_Shift_Line.wav - an aluminum cone cabinet that many love and hate. Hartke achieved a very flat response in the 100-1000 Hz range. It does not sound good for everyone, but it is definitely recognizable and cool. From personal experience, we can say that it is perfectly equalized in post-processing and does not require the admixture of ultra-low frequencies. Four ten-inch aluminum speakers, but very distinctive.

• 03_TC_Electronic_BC410_by_Shift_Line.wav - TC Electronic's fairly cheap BC line with four custom 10" Eminence speakers and a tweeter (non-switchable). But the cheapness of the cabinet does not make it bad or unsuitable for recording. In addition, it can be made to sound oh so good. The impulse was filmed in a very non-trivial way: with two ribbon microphones so that frequencies below 500 Hz were highlighted. This is an impulse for those who are looking for a very convincing low end and a smooth response in the 400-6000 Hz range. If someone likes it a lot, then we can present a couple more variations of this cab, ask.

The second group is tags. Fifteen-inch mids keep a lot of people awake, and we've rounded up three great options!

• 04_Ampeg_Heritage_B15_by_Shift_Line.wav is a classic from Ampeg. What else do you need for a good classical bass? If you know what I mean. The B15 is a great amp, and the cabinet is quite remarkable too. The re-release was successful, but the original could not be removed at the time. A characteristic feature is a very cool mids, a pronounced peak at 100 Hz and a dip at 250 Hz. Well, to consolidate the vintage, the cabinet was filmed with a ribbon microphone. Great round sound. Of course, flat string basses and B15s make a great pairing. Well, and most importantly: when recording, you will not rattle the top cover of the cabinet, to which the amplifier is screwed (everyone is good at the cabinet, but this detail is annoying).

• 05_Sunn_200s_by_Shift_Line.wav - You're already familiar with the Sunn 200s cabinet, whose boost can be found in both the standard CabZone LE set and the Olympic MkIIIS tube preamp, but this boost is slightly different. Other microphones and positions were used for it. In fact, a variation on the theme, but the character is more evil and voluminous. Slightly more open low end and the response drops 10 Hz lower. And so - all the same evil cabinet for rock with the classic two basins with a diameter of 15 inches.

• 06_Mesa_RR215_by_Shift_Line.wav - Mesa Road Ready 21, knight with visor down. The travel-ready cabinet has a very bright modern character and is a great counterbalance to cabinets from Sunn and Ampeg. The failed mids and bright tweeter make the sound very biting and modern. Works great with both clean and overdriven sounds. Well, layering from mixing clean to dirty is his strong point.

• 07_Ampeg_SVT-810E_by_Shift_Line.wav - again, a variation on the theme of the cabinet already known from CabZone and Olympic MkIIIS. But there are nuances. This impulse was captured by a different set of microphones and from a slightly different angle. It has a slightly raised bottom and a slightly tucked top. This was done in order to less gritty, but continued to delight with a very dense sound. You can always choose what is closer to you in terms of genre.

Three "experimental" impulses. You can do a lot with impulses. And we did the following: in impulses 08-10, the guitar cabinet speakers are used to respond in the middle and high frequencies, but the bottom is straight. Or rather, not quite straight, but the way they usually do in the studio. Soft cutoff below 40Hz and almost direct response up to 1000Hz. In fact, an impulse is the sum of a low-frequency DI signal and a guitar cabinet, but perfectly aligned in phase, and therefore without problems with missing notes.

• 08_ElectroVoice_EVM12L_by_Shift_Line.wav - there is such a legendary speaker that was used for both bass and guitar cabinets: ElectroVoice EVM12L. It was from him that the response was taken and mixed with the clean one in this file. Microphone Oktava 012, several positions to emulate a large cabinet, they are mixed with the main one with a microphone in the center of the speaker. Lows are softly cut at 30 Hz.

• 09_Orange_PPC212_bass_edition_by_Shift_Line.wav - Jim Root's signature cabinet but adapted for bass. The impulse was taken through the Marshal ending with EL84 lamps and a slightly raised presence and a dip turned on. There was no need to mix in a lot of DI signal, and it sounds “like Lemmy”, but the full setup is no longer needed - mixed and wrapped. The low-frequency cutoff is around 40 Hz, and the characteristic Marshall hump at 80 Hz is also present.

• 10_Celestion_V30_bass_edition_by_Shift_Line.wav - guitar classics for bass. The lower frequencies have a cut below 30 Hz. Significant guitar cabinet mixing starts around 700 Hz. The speaker is taken with a Sennheiser 906e microphone in the center, at a distance of 15 cm from the cone. Fits well with guitar overdrive applied on bass.

For dessert - a couple of impulses that are already in the CabZone LE speakersim and the Olympic MkIIIS preamp, but with slight changes in the frequency response. Perhaps only the most eared will notice the changes, but they are there. Well, for those who do not yet have our devices, let there be impulses from them.

• 11_Sunn_200s_Olympic_MkIIIS_edition2.wav - slightly modified impulse from CabZone LE / Olympic MkIIIS. Slightly tweaked the upper frequencies. Otherwise, all the same "rock out of the box."

• 12_Ampeg_SVT-810E_Olympic_MkIIIS_edition2.wav - like the previous one, corrected on the top, but in minus. We think that this is a very universal impulse, which in most cases will be the main one, but the choice is yours.
video source : Harshit Yadav
Shift Line - Bass IR Pack (IR LIBRARY) (WAV)
Re-download
Magnet Link File Size 59KB